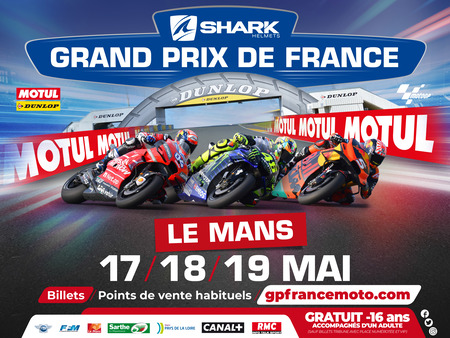 Like the two previous seasons, 2018 ended with another title for Marc Márquez. This fifth MotoGP World Championship crown places the Spaniard in third place in the all-time winners list, level with Michael Doohan of Australia. Márquez will again be the man to beat, but this time faces a new challenge: sharing his Honda box with three-time MotoGP World Champion Jorge Lorenzo (2010, 2012 and 2015).

With seven-time winner Valentino Rossi still competing on his Yamaha M1 after signing a new deal which will run until 2020, the 2019 season features 15 of the last 18 years’ champions!

However, the three current and former world title holders are not the only ones aiming to finish top of the pile. Italian Andrea Dovizioso, winner of the year’s opener in Qatar, will be looking to go one better after ending the last two campaigns in the runner-up slot.

That first Grand Prix of 2019 set the tone for the season and a new record: the smallest-ever margin between the race winner (Dovizioso) and the lowest finisher to be awarded a point (Johann Zarco). Just 15.093 seconds separated 15 racers! The premier category had never seen such a finish!

The 2019 season marks a turning point in Zarco’s career as the Cannes-born star has joined Red Bull KTM Factory Racing after two seasons with Hervé Poncharal’s satellite team Yamaha Tech3. Dedication pays and Zarco’s new “official rider” status means a factory machine to match his talent and the chance to take his career to the next level.

He is not the only Frenchman among the elite as youngster Fabio Quartararo is also racing in MotoGP this year for the new Yamaha satellite team Petronas Yamaha SRT. After two seasons in Moto3 and two more in Moto2, the 20-year-old from Nice has now been promoted to the premier league of motorcycling. He has been quick to make his mark too, clocking the fastest in-race lap time at the Qatar Grand Prix and becoming the youngest rider to clinch pole position in MotoGP history at the Spanish Grand Prix.

Moto2 and Moto3 qualifying based on MotoGP

The Moto2 and Moto3 classes have been given a boost this year with a revised qualifying system that more closely mirrors the MotoGP format. The 14 quickest riders in free practice now go directly through to the second qualifying session (Q2), which determines pole position, where they are joined by the four fastest from Q1.

With all these ingredients, the French Grand Prix is sure to conjure up a fantastic feast of motorcycle racing, especially as the International Bridgestone Handy Race will once again be on the menu.

Inspired by Frenchman Stéphane Paulus and Emiliano Malagoli of Italy, the inaugural International Bridgestone Handy Race was held in 2017. It has since become a fixture of the French Grand Prix programme and will naturally be back for its third edition this year.

So don’t miss what is sure to be an exciting SHARK Helmets French Grand Prix! Make a date with Le Mans on 17–19 May.